The Story of Ken Patterson and The Haunted Studios™

The Haunted Studios Collection™ began in the summer of 1963. The collection's founder, Ken Patterson, that year met and was befriended by sculptor and 60s counter culture founding father Vito Paulekas. The Photo Below shows Ken along with other members of Vito's Dancers with the band The Fraternity of Man in 1967. 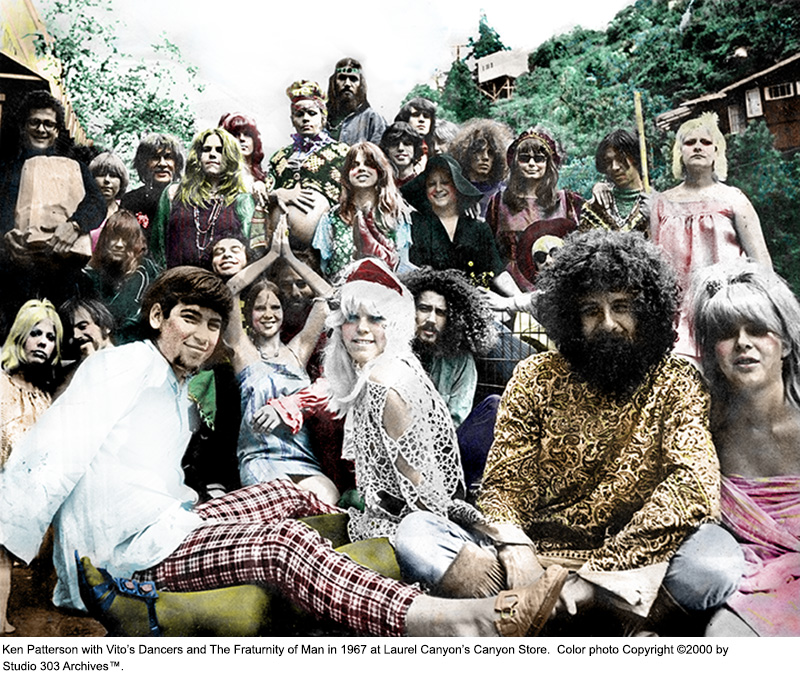 It was through his friendship with Vito that Ken met Jerry Hopkins, then talent coordinator (aka "kook-booker) for The Steve Allen Show that taped in a dilapidated theater on Vine Street in Hollywood. The one time silent film theater had been rechristened The Steve Allen Playhouse and converted to a "live on tape" audience rated television studio. Years later Ken and his friend David B. Doty would again cross paths with Jerry as a supplier of hand made God's Eye necklaces to Hopkins' Headquarters psychedelic shop in Westwood. 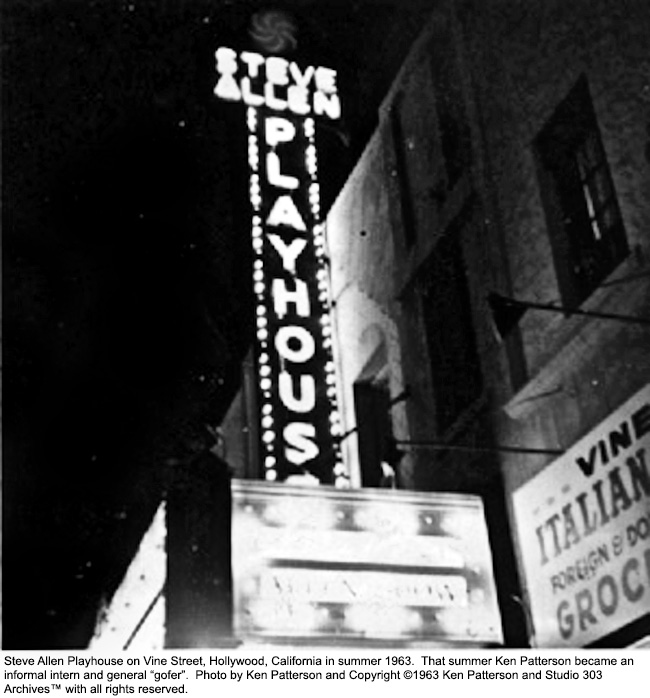 Ken made friends with many of the show's crew members, and spent his days "hanging out" at the studio. It was during one of these hang out sessions that Ken crossed paths with The Original Maltese Falcon. In that summer of 1963 The Steve Allen Show was getting a new set, and a general house cleaning. When the old set was coming down Patterson was offered a small truck load of "trash" including a plaster casting of The Original Maltese Falcon™, the very first artifact in what was to become The Haunted Studios Collection™.

The Falcon was to have been used in a comedy sketch featuring Allen as Sam Spade, but for reasons unknown the bit was never performed and the Falcon sat backstage at The Steve Allen Playhouse on Vine Street in Hollywood, never returned to rental house Century Props.

With help from Vito, Ken produced the first mold from The Falcon. Within days he had sold the first copies through a collector's book shop just off of Hollywood Blvd.  Sensing a large, and largely untapped market in movie collectibles Ken set about repeating his initial success by mining other dumpsters.

Vito and Ken spent many afternoons that summer visiting the trash bins of Universal, Paramount, Desilu, CBS, ABC, and other studios. This was long before the days of locked trash bins, and long before anyone realized the collector's value in the discarded props and life masks.

Ken also attended Vito's sculpture class where he perfected the techniques used today for the Studio 303 castings and finishes. Below are some pictures from Ken's collection of photos of his time with Vito, the first two from 1966, then 1967, and then from 1968. 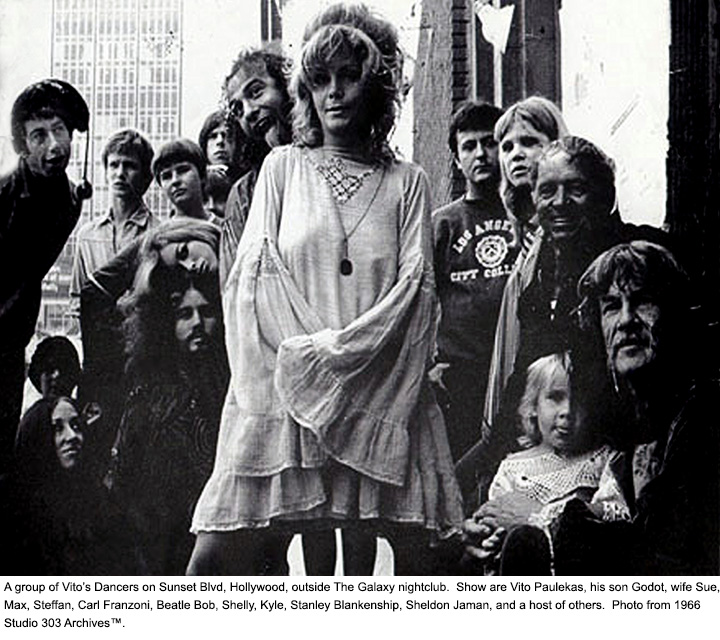 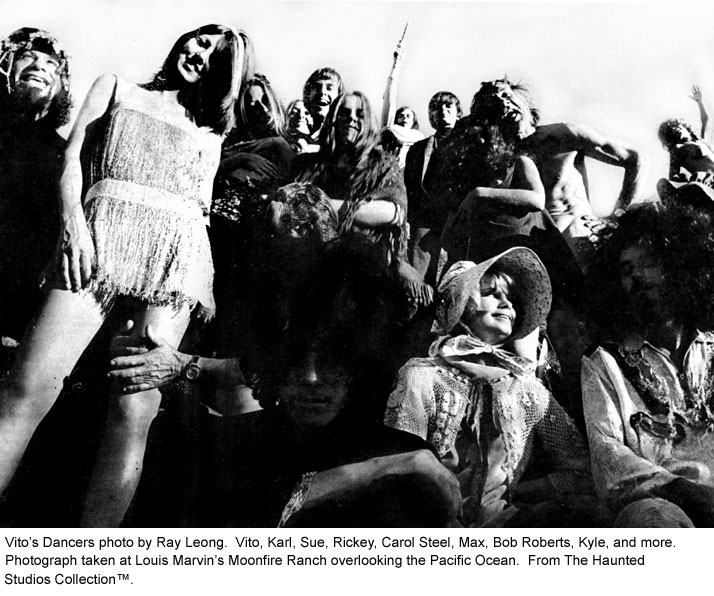 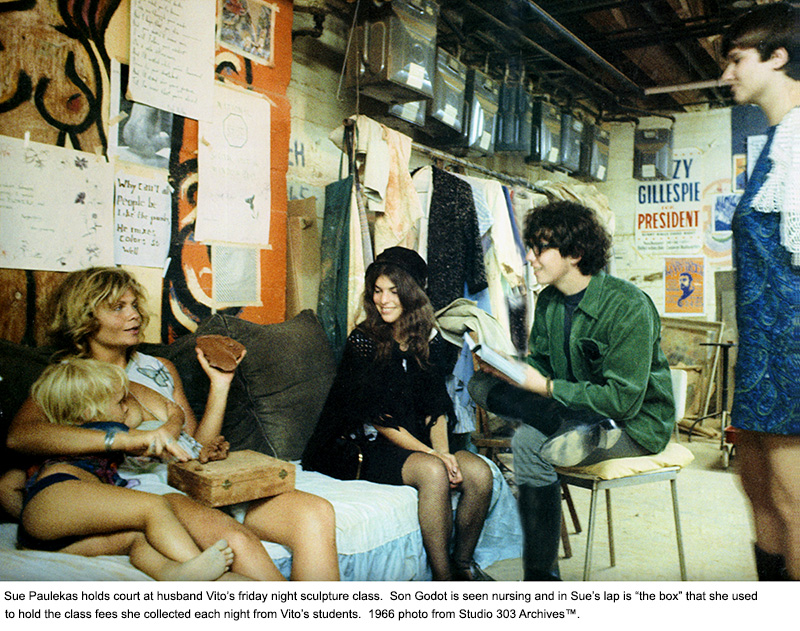 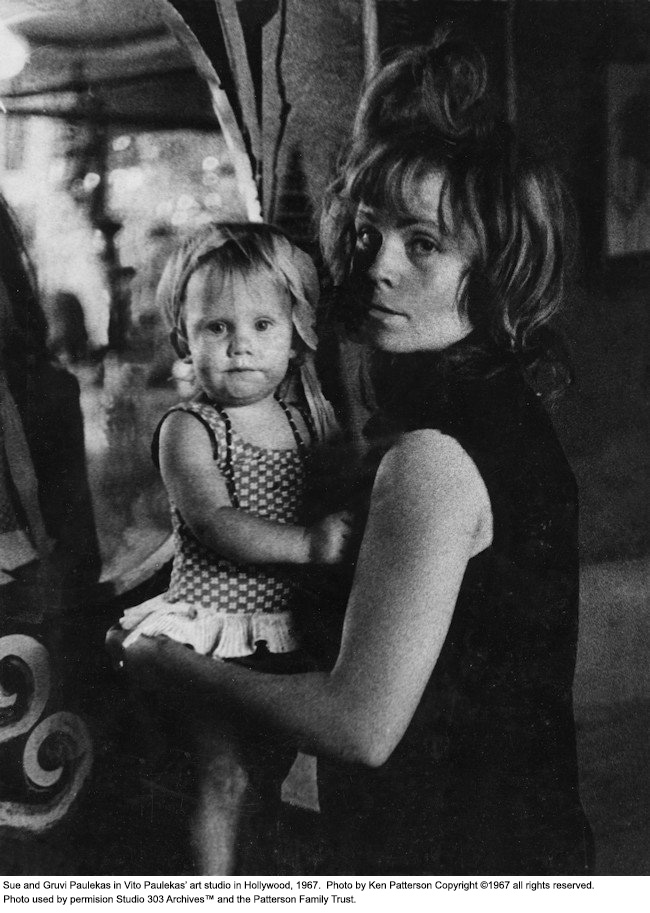 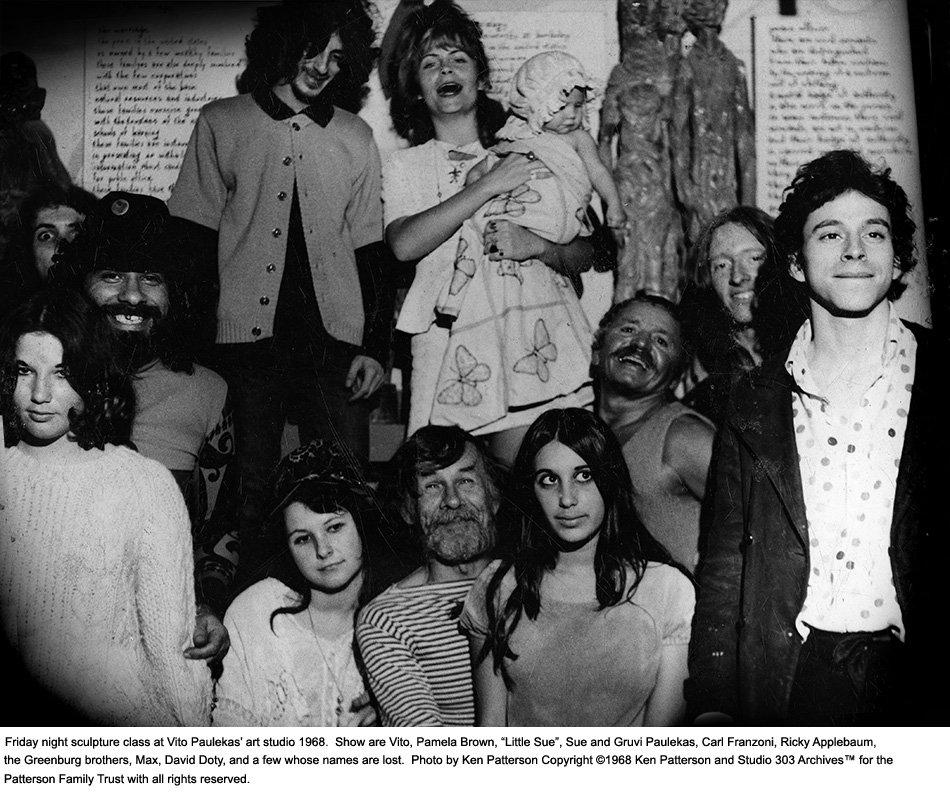 Near the end of 1968 Vito announced that he was leaving Los Angeles and that his Studio would become available that December. Ken Patterson formed a commune of artists that consisted of himself, David Doty, Ricky Applebaum, and Randy Black Fox. Ken signed the lease with building owner J.D. Kubernick and took over the property on December 1, 1968.

The following year Vito and his family settled in Cotati, California and in June of that year Ken joined him and lived in his home for several months. In December of 1969 Ken opened Changes Antiques in the Cotati Company #2. Changes was one of the first new, hip antique shops in Sonoma County. Later Ken partnered with Randy Black Fox, his partner Loretta, and a crazy Family Dog hippie called Bells to take over the Fat City head shop in Cotati and operated the establishment into the 1970s. 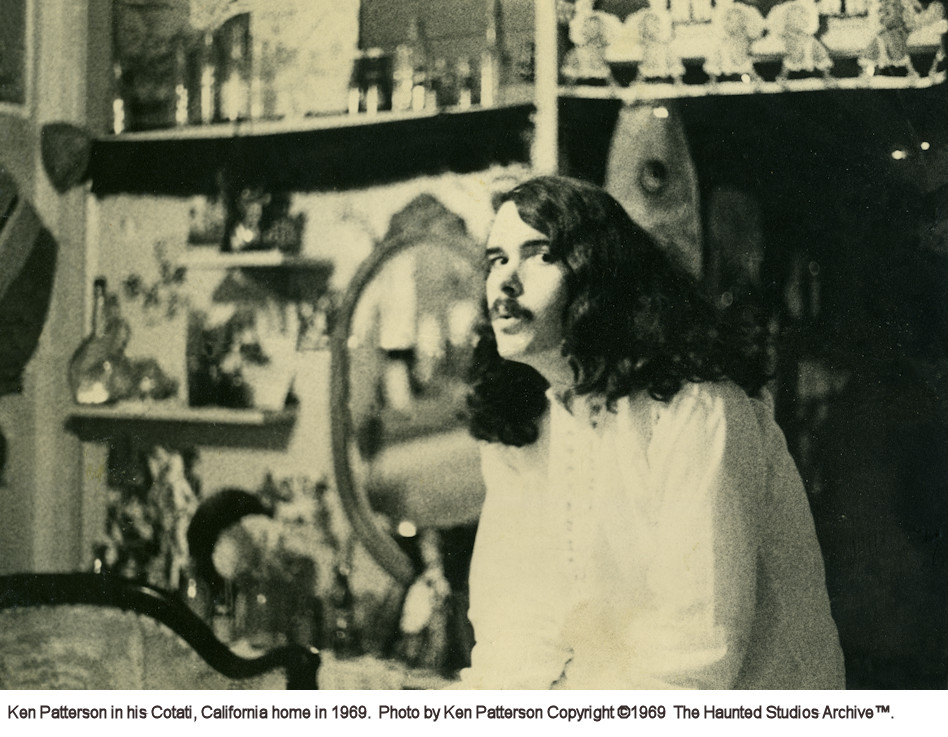 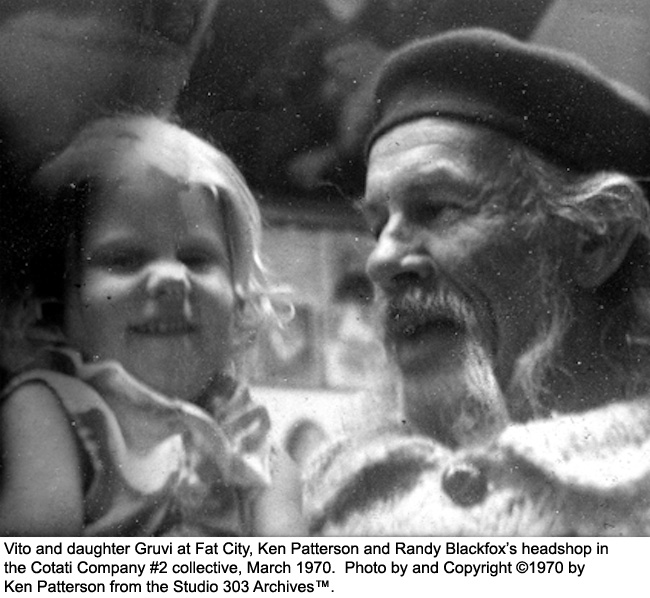 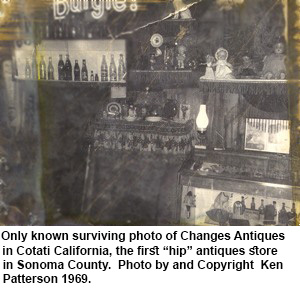 From the 1970s through the 1990s Ken worked in the film and television industries as well as teaching classes in Television Production and Post Production at Los Angeles City College and Pasadena City College. Using connections made during this period Ken was able to add to the collection, and when he retired from working in the industry in 2001 there were, over the years, more than 3,000 Life and Death Masks (although never that many at once!) and hundreds of original film props in the Haunted Studios Collection™.

In the fall of 1980 Ken and his wife Lisa unknowingly moved into a haunted house high in the Hollywood Hills above Los Angeles.

Located next to the infamously haunted Barbara Stanwyck estate, aka the Holly Mont Castle, on Primrose Avenue, the sprawling mid-century ranch house would become their own paranormal challenge for the next two years. The area surrounding both homes has been thoroughly investigated by world-renowned parapsychologist Barry Taff as detailed in his 2010 book Aliens Above, Ghosts Below: Explorations of the Unknown.

The ghostly activity, which included doors opening and closing on their own, disembodied voices, disappearing and reappearing books, money, and clothing, was centered in the guest bedroom, basement, and one of the hall closets. The house sat high on a hill composed of limestone and granite, both known for their association with the supernatural.

One of the first victims of the haunting was house guest Dusty Dawn . Dusty was visiting the Pattersons for a week at the time of her birthday in February of 1981. After everyone retired for the night Dusty claimed she was awaken by something strange sitting on the edge of her bed. The event so disturbed her that she left the bedroom and spent the night sitting in the living room, fully dressed, bags packed. She asked to be driven to the airport that morning, her week long trip cut to less than 24 hours.

She refused to speak of the incident and took the details of that night to her grave.

Other visitors to the home found they could not take their eyes off the long, dark hallway that lead to the guest bedroom, where even though the room was south facing and drenched in the hot California sunshine, it remained several degrees colder than any other room in the house. The dirt floored storage room located directly below the guest bedroom had its own problem; clothing from the 1920s would mysteriously appear in old luggage stored there. It was later learned that old, collapsed caves connected the basement storage area of the house with the violently haunted Holly Mont Castle. Further compounding the paranormal "charge" was an underground river that ran between the two houses then down to the valley below.

Another odd incident happened when the Patterson's business partner, Boyd Fiedler, offered to help trouble shoot the HVAC system located in the basement. Boyd went down to have a quick look, but was gone for over an hour. While he was downstairs the heater fired to life for the first time since moving in, but when a clearly shaken Boyd came back he said he gave up because he could not find the fuse box. He was sure he was gone less than five minutes. White as a sheet and shaking, he joined Dusty in refusing to ever speak of his experience. Shortly thereafter Boyd left the partnership, severed all connections with the television industry, moved out of town, and was never heard of again.

The most frightening incident took place during a city wide power failure. Upon returning home to their dark and empty house the Pattersons were unable to cross the threshold to enter the home. Something, or someone, was preventing them from entering. At each attempt they were pushed back by overwhelming fear and nausea. They retreated and spent the night in a hotel. From that day onward the lights and a television in the house were left on in an attempt to ward off whatever had denied them entrance.

Large sums of cash would disappear from various rooms in the house and could always be found under the bed in the guest room. One evening the Pattersons returned home to inexplicably find the guest bed turned on its side. They left the bed as they found it and that was the end of things appearing under it. There was no one in the house when the bed stood up on its own and no logical explanation was ever found.

The entry closet was another hot spot, its door loudly opening and closing a dozen or more times per night while the Pattersons tried to sleep. Out of desperation they screwed the door shut and that was the end that problem. It was common for brand new appliances to immediately stop working, glassware would shatter sitting untouched on the kitchen sink, one of the toilets literally burst when the bathroom was unoccupied, and videotapes would disappear from their storage places never to be seen again.

The hauntings continued until the Pattersons moved out following the birth of their daughter in March of 1982. 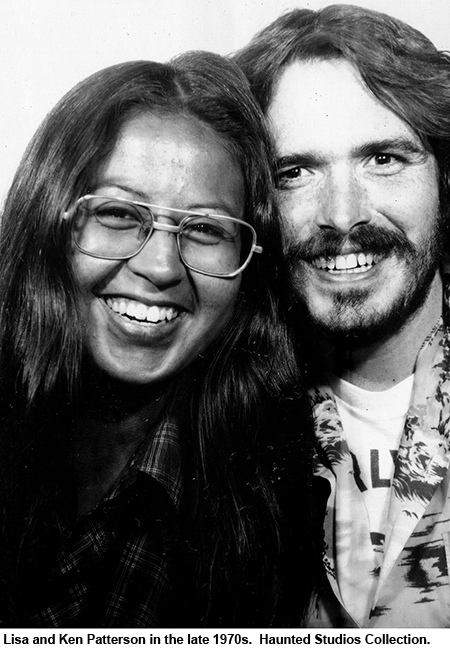 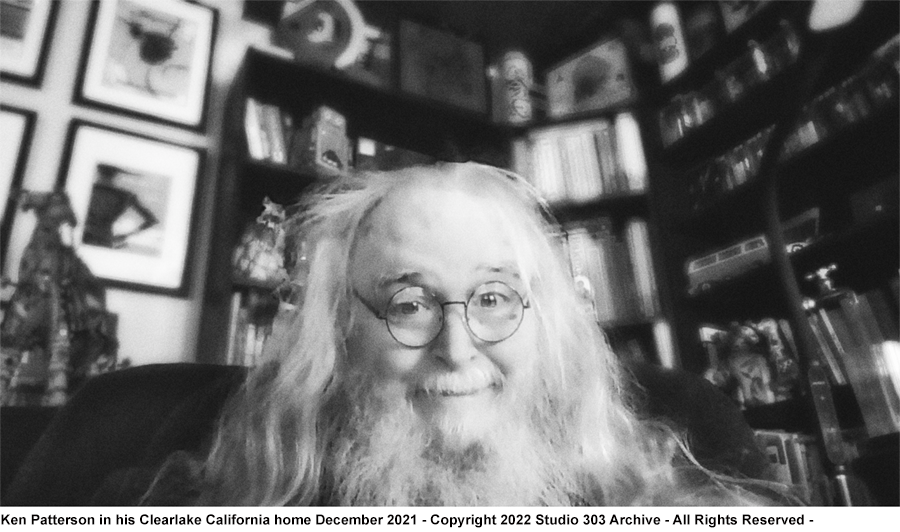 Ken and his wife Lisa live in semi retirement in northern California.  Beginning in 2019 Ken began the process of recording his original musical compositions and in the summer of 2022 they began to appear on Spotify and all other music platforms.  A new division of The Haunted Studios, Haunted Studios Records, was created to oversee the distribution of the music.  Ken's collection of vintage analogue and digital synthesizers grows each month, with over 15 original pieces of gear.  Ken's original Mellotron is the centerpiece of the collection and is included on every recording to date.   Today Ken is a respected musical artist in his own right, as well as a prolific sculptor, writer, and photographer. Additionally he remains the face of The Haunted Studios as Curator Emeritus and continues to be a sought after consultant and content provider for projects relating to the counter-culture movement of the 1960s in California.

If you have comments about this page, or would like to suggest an addition, please use this form to let us know.

"These have been some of the highlights of our company's history.  I've been doing this for over 55 years so as you can guess there is a lot we haven't added here.  More is coming, but if there is something you would like to ask about, or if you have a suggestion for changing this page you can contact us directly using the form above" 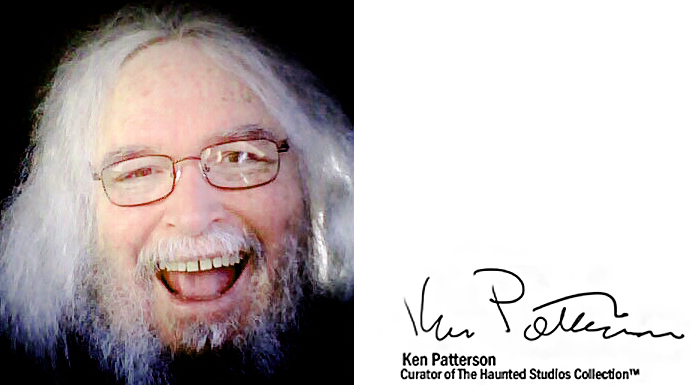 Studio 303™ was founded in 1963 and for over 55 years we have been known for the innovation, quality, and value of our products.

Our products continue to be handmade in the USA; we are a small company, our goal has always been to be the best, not the biggest, kid on the block.